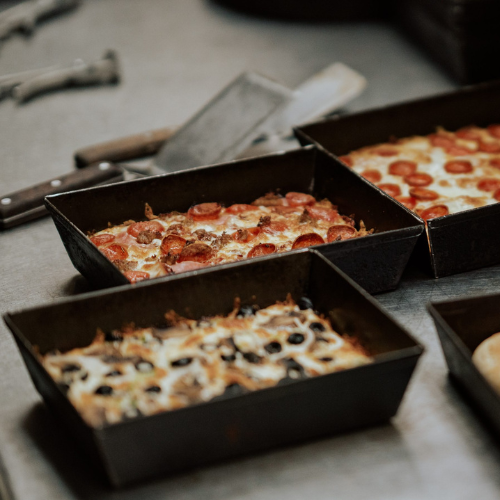 Austin, TX  (RestaurantNews.com)  Via 313 fans in Cedar Park will soon be able to enjoy their favorite genuine Detroit-style pizza in their neighborhood when the award-winning concept opens in the 1890 Ranch shopping center on Monday, March 28!

Located at 1335 E. Whitestone Blvd. Ste. 200, the new pizzeria will celebrate its grand opening with an official ribbon-cutting ceremony hosted by the Cedar Park Chamber of Commerce at 10:30 a.m. Then, Via 313 will begin serving its mouthwatering “square” pizzas to the public!

Via 313 will quickly carve out a slice in the Cedar Park community by supporting the Yellow House Foundation, which provides a safe place for individuals and their families in Williamson County and surrounding areas as they recover from alcohol and substance abuse. On Wednesday, March 30, the locally owned and operated restaurant will donate 50% of its sales from the day to the nonprofit. Via 313 will also encourage guests to donate on their own through URL codes placed on their tables.

“My brother and I have long wanted to bring Via 313 to the people of Cedar Park,” said Co-Founder Zane Hunt. “We couldn’t be more thrilled to finally be able to do just that. For the past 10 years, we’ve been fortunate to develop such a loyal following throughout Austin, and we’re so proud to expand and serve more pizza lovers in the surrounding areas. We look forward to welcoming everyone in as we celebrate our grand opening … it’s been such a long time coming. We can’t wait to see you all!”

When Via 313 makes its Cedar Park debut, it’ll serve the brand’s renowned Detroit-style pizzas that feature pillowy crust, premium ingredients and fresh sauce laid on after the bake. In addition to offering vegan and vegetarian options, guests can substitute gluten-free crust or dairy-free cheese on their pizza of choice. The 3,300-square-foot restaurant will have an expansive patio and a dedicated to-go area for guests to conveniently take home their delicious pizzas.

Before Detroit-style pizza became a hit outside of the Motor City, trailblazers Brandon and Zane Hunt decided to bring their hometown pizza to Austin, Texas. Since 2011, they’ve built an Austin icon that locals and tourists flock to for genuine Detroit-style pizza. Via 313 currently operates four full-service restaurants and two permanently placed trailers throughout Austin and Orem, Utah, with several more locations in the pipeline. Via 313 was dubbed “one of the very best pizzas” by Food and Wine Magazine, named “Independent Pizzeria of the Year” by Pizza Today™ and recognized as one of the “Top 10 Pizzas in America” by Food Network. For more information, visit via313.com or follow Via 313 on Instagram, Facebook or Twitter.