Rise of an Empire: Via 313 Gears Up to Conquer the West

Related: What are the elements of authentic Detroit-style pizza?

Zane Hunt was just five years old when he met the ideal business partner for Via 313: his baby brother, Brandon, fresh from the womb. Raised by their mom, the Hunt boys grew up near Detroit and ate a lot of pizza together—three or four times a week, as Zane recalls. And unlike some brothers, they got along pretty well. They still do—so well, in fact, that they founded their first pizza trailer in Austin, Texas, in 2011 and have since grown Via 313 to five locations in the capital city, including three acclaimed brick-and-mortar restaurants and two permanently placed trailers.

And they did it all with a product that most folks in Austin had never heard of: Detroit-style pizza.

Is it safe to say they’re building a pizza empire? “It’s gonna be an empire,” Zane confidently says. After all, they now have the backing of Savory Fund, a Mercato Partners Fund that invests in food and beverage operations. Headquartered in Salt Lake City, Savory Fund will help Via 313 open six additional locations by the end of 2021, taking the brothers’ award-winning concept to Round Rock, Cedar Park and San Antonio, Texas, as well as to Orem, Lehi and Murray, Utah.

The Hunt brothers closed their deal with Savory Fund last year after fielding offers from several private equity firms. It’s the kind of deal many smaller pizzeria operators dream about. But it took a lot of hard work, savvy neighborhood marketing and some amazing pizza to make it happen.

Taking the Risk
First things first: What’s it like to run a business with your brother, especially in the grueling pizza industry? “It ain’t too bad,” Brandon says. “I think we’ve been in one fight, and that was early on, when I didn’t know how to contain my emotions.” He laughs and adds, “Is this therapy or are we talking about pizza?”

Easygoing and soft-spoken, Brandon and Zane josh and tease each other, as brothers do. But their mutual respect and fondness shine through in their conversations about Via 313’s origins and rapid expansion. “The hardest thing to remember is that we’re brothers first and business partners second,” Brandon says. “We’ll get together and just start talking about pizza and business the whole time. Sometimes you’ve gotta remember to talk about sports and family.”

Zane was the first to relocate from Detroit to Austin. That was in 2009, and, upon arriving with his wife and kids, he immediately embarked on a quest for good pizza. “Being the pizza addict I am, I started trying to find things that reminded me of home, including different pizza styles,” he said. “It became apparent quickly that this wasn’t a strong pizza town. We have good pizza here, but there wasn’t a lot of it, and we didn’t have a lot of variety.”

The brothers, both of whom had restaurant experience, stayed in touch by phone and mulled over the idea of starting a pizzeria that served the kind of pizza they grew up with. “It was something we’ve always talked about doing—this idea of owning a business together,” Zane says. “I just had to convince Brandon that it was a wise idea to give up everything he had going for himself in Detroit and move here.”

“It was a risk, because I was managing a bar, making pretty good money and partying every night, so it was a ton of fun,” Brandon recalls. “But when you’re creeping into your 30s, it’s time to slow down and grow up. Well, I’m still trying to grow up….”

Michigan’s long, cold winters helped Brandon make up his mind. At the same time, their mother was dying of brain cancer, and her end-of-life reflections gave them pause. “We had time to spend with her during those months,” Zane recalls. “She was feeling emotional [and] thought she still had unfinished business in her life. There was a bunch of ideas she had that she never took the time to pursue. That really struck a chord with me, and Brandon and I talked about it: ‘We can’t end up like that. We’ve got an opportunity to maybe open a business and chase this idea. We have to do it. We can’t let anything stand in our way.’ So we used that for motivation.”

They made sure to pick the right spot to park their trailer: next to the Violet Crown Social Club, a hip watering hole on 6th Street that didn’t offer its own food. “It picked up steam as people would be drinking there, trying our pizza, and telling people around town about it,” Brandon says.

The brothers also set out to earn new friends at surrounding businesses in the area. “We would just make pizzas and take them to anyone who would help spread the word—bartenders, servers, tattoo artists, hair salons, barber shops,” Brandon says. “They would be in front of people all day and talk about us.”

But their pizza style itself was the biggest selling point. Although the brothers grew up thinking of Motor City pies simply as “square pizza”—nothing out of the ordinary—Austinites were drawn to the idea of a pizza in the Detroit style, which had not yet caught on nationwide. “It ended up being the greatest marketing strategy ever, because it sparked questions and conversations about what this pizza is,” Brandon says. “I think Austin prides itself on being the first to try Detroit-style pizza [outside of Detroit]. So it ended up working in our favor.”

About a year after opening their first trailer, the brothers opened a second one in a different section of Austin. To ensure consistent product and service, they created an employee manual, started putting systems and processes into place, and committed their recipes to paper. Now they were off and running. They opened their first brick-and-mortar store in April 2015, a second one in 2016 and a third in 2018. “Then we started feeling stretched and needed to bring in some outside help,” Brandon says.

Preparing for Explosive Growth
The Hunt brothers had already proven they could round up equity funding for their expansion plans. According to the Austin Business Journal, they raised $480,000 in 2017 and $350,000 the previous year. But the Savory Fund partnership is a game changer. “It was another organic situation,” Zane says. “Some longtime customers of ours happened to be investment bankers who put together packages for restaurants to go to market and find funding and partners. They approached us to see if that’s something we would be interested in pursuing. I didn’t quite know what we were getting ourselves into, but I was open-minded.”

Brandon wasn’t sure either. “We’re pizza guys,” he says. “We didn’t know what our company was worth. We’re just existing. We’re just happy to be here.”

Eventually, representatives from the Savory Fund, who knew the other investment pros, came to town and tried Via 313’s pizza. They realized the brothers were onto something and wanted to meet. “We hosted them in Spring 2019…and had a fantastic meeting with them,” Zane says. “We definitely had our guard up. I had all these preconceived notions about what people from the private equity world would be like—probably really stuffy, suits and ties….We’ve heard horror stories from friends in the industry.”

Some of his friends, Zane says, “were given a boatload of cash and told to go expand. That scares the hell out of us. We need to work with people who are better at what we do than we are. We were cautious. But we met the Savory group and hit it off with them. It was almost too good to be true. We still had our guard up….But they were the right fit for us.”

So why did the brothers choose Savory Fund? For one thing, the company’s staff knows the restaurant business inside and out. “There were more lucrative offers that felt soulless,” Brandon says. “With Savory, we get, like, 50 people in the corporate office who are really great at what they do: real estate selection, helping with training manuals and HR, tightening up everything to make it easier to scale so we can focus on growing.”

“At the end of the day, it’s just about people,” Zane says. “When you’ve got this type of explosive growth, the number of people you need to pull that off is staggering. We’d just been maintaining [the business so far]. Now we’re like a toy car being pulled, with all this tension building up in the wheels, and you let it go, and it flies.” 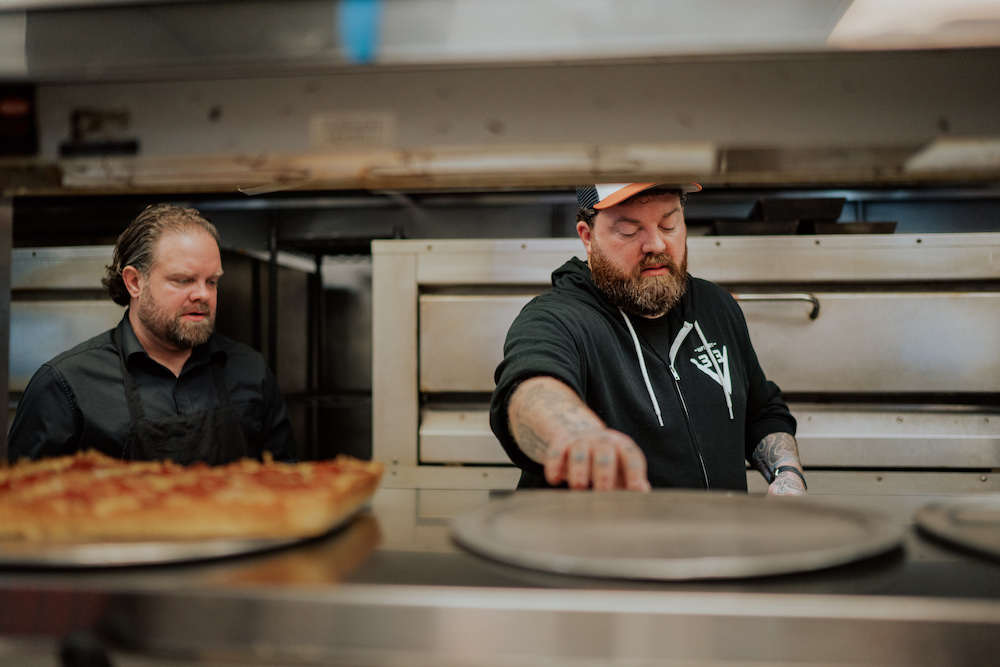 A Yin-Yang Thing
Fortunately, Detroit-style pizza is red-hot these days, and executives at Savory Fund see Via 313 as a good bet to take it further west, including their own backyard around Salt Lake City. “Over the past decade, there has been a lot of disruption with fast-casual pizza concepts and low-cost pizza options,” said Andrew K. Smith, managing director of Savory Fund. “None have been more interesting, nostalgic and quality-driven than Via 313. Detroit-style pizza is one of the best-kept secrets, and we can’t wait to bring it to more communities in Texas, Utah and additional states that will be announced soon.”

Meanwhile, the Hunt brothers seem happily amazed—although not necessarily surprised—by their own success. They’ve been hailed by the Food Network for offering the “Top 5 Pizzas in America” and praised as “pizza gods” by Austin Food Magazine. They have also won The Austin Chronicle’s award for Best Pizza in 2018 and 2021, and the Best Food Truck award in 2017, while tying for Best Pizza in 2015. The newspaper has also bestowed its First Plate Award on Via 313 every year from 2013 to 2021.

But all of that success hasn’t gone to the brothers’ heads. They know they face stiff challenges as the company expands and pressure mounts to live up to investors’ expectations. Regardless, Zane and Brandon plan to stick together for the long haul. “I don’t know that I’d want to be in business with anybody else,” Zane says. “We know each other so well, and we’ve been so tight for so long. We can read each other’s thoughts, and we know where the other is going before we get there. We fill in each other’s gaps. It’s like a yin-yang thing. It’s ideal.”

Sidebar: Deconstructing the Via 313 style 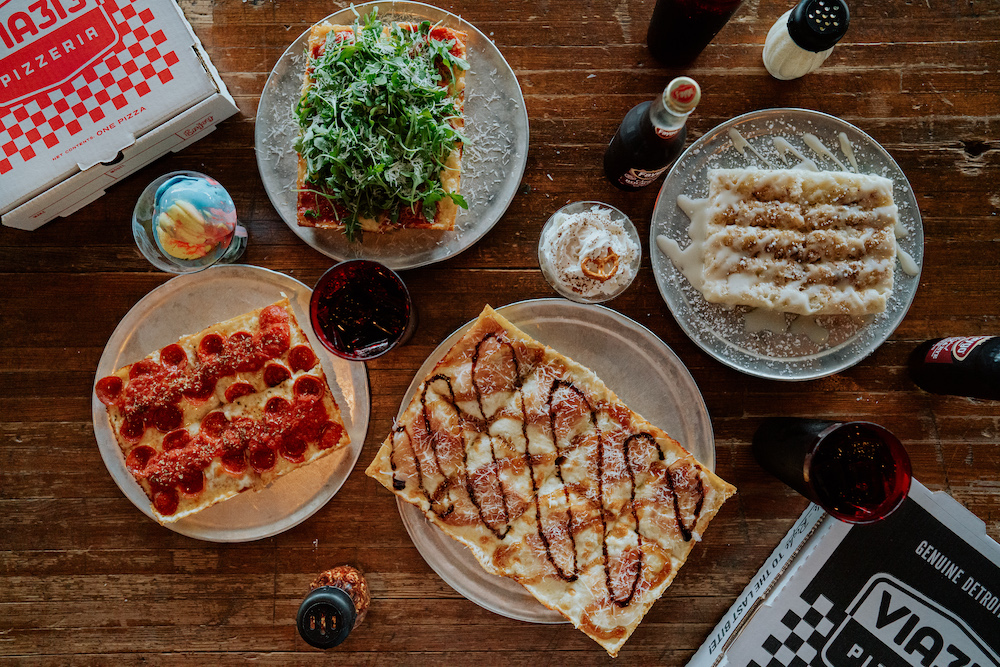 The secret to delicious Detroit-style pizza isn’t really a secret at all, says Zane Hunt, who co-owns Via 313 with his brother, Brandon Hunt. “It’s the same for any good pizza: It’s just about balance, cheese-to-crust ratio, balanced heat from top to bottom.” For Brandon, the sauce immediately springs to mind. “Most places put way too much stuff in their sauce and don’t just let the tomatoes be tomatoes. We don’t do anything to our tomatoes. It became trendy, with Domino’s, Pizza Hut and Little Caesars, to use this really heavy, herbed sauce with garlic. It gives you heartburn and just wrecks the balance.…Don’t overspice your sauce. Less is more. Be real subtle.”

What about choosing the right cheese for caramelization on those square edges? “I think it can be any cheese you like that doesn’t burn,” Zane notes. “Traditionally, [Detroit-style pizza] uses brick cheese, but that’s hard to find. I’ve seen it done with Gouda, cheddar, Muenster and mozzarella.” The Hunt brothers stick with white cheddar around the edges of the pizza and whole-milk mozzarella down the center.

Finally, to get that deep-fried, crispy-bottom effect, they grease the pan with a little buttered Crisco. “But it should be a really light sheen,” Brandon says. “It also adds a little bit to the flavor profile.”